The documented risks of these drugs are provided so the public can make informed, educated decisions. Vyvanse is a stimulant drug, classified by the U.S. Drug Enforcement Administration (DEA) as Schedule II, in the same class of highly addictive drugs as morphine, opium and cocaine. The DEA states that the use of stimulants can lead to “severe psychological or physical dependence” and that “these drugs are also considered dangerous.” Vyvanse is also known as Lisdexamfetamine.

To see the total figures from IQVia on the number of people taking stimulants in the U.S., click here.

Also, read the FDA’s Vyvanse Medication Guide for more information. MedGuides include “the particular serious and significant public health concern that has created the need for the Medication Guide” and notes “pediatric risks.” (Note: Unfortunately, the FDA MedGuides only work on a desktop, not on a mobile device. Please complain to the FDA to make their public advisories accessible to all. 1-888-INFO-FDA or 1-888-463-6332.)

There have been nine drug regulatory agency warnings from three countries (Canada, Denmark and United States) on Vyvanse (or lisdexamfetamine). These include the following (note that some warnings cite more than one side effect, so the list below may not be equal to the total number of warnings):

There have been three studies done in two countries (Scotland and United States) on Vyvanse (or lisdexamfetamine). These include the following (note that some studies cite more than one side effect, so the list below may not be equal to the total number of studies):

Adverse Reaction Reports Filed with the US FDA: There have been 2,991 adverse reactions reported to the US FDA in connection with Vyvanse. 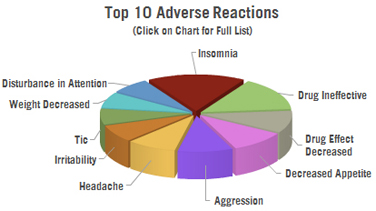 Documented Side Effects of Vyvanse:
Source: Physicians Desk Reference, National Institutes of Health’s Medline Plus, and/or the drug label.